Why is 5G Revolutionary? An Introduction to 5G Phones 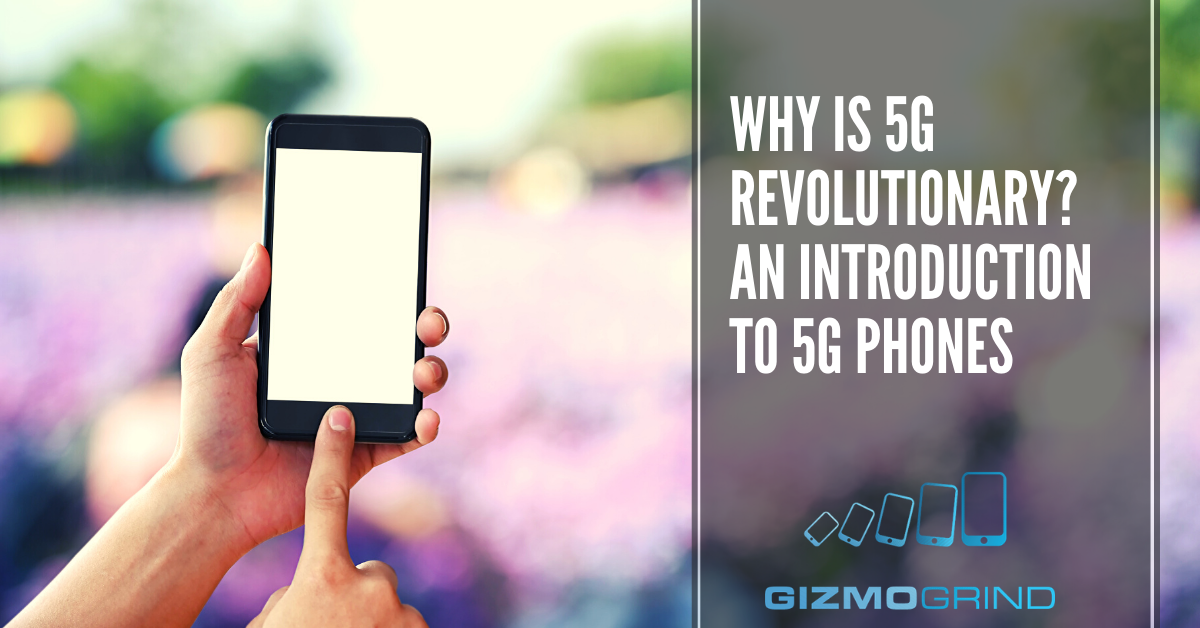 The 5G revolutionary is here.

You can’t read an article or listen to a podcast on smartphone tech without hearing about it.

However, there are still many consumers out there that don’t know what 5G is, or what it means to the future of their smartphone experiences.

As digital devices like iPhones and tablets get smarter, they’re producing vast amounts of data. That data comes with a multitude of challenges, from protection concerns to the need for strategies that enhance the wireless network that processes our conversations.

In the last year or two, communications giants like AT&T and Verizon have been racing to roll out a new generation of wireless network technology: 5G.

While 5G has been criticized for things like a high projected cost and potential broadcasting issues, the more comprehensive agreement is that this technology will deliver faster, more reliable connections. More importantly, the tech will also provide the extra bandwidth required to support everything from AR and VR technology to the rising demand for IoT.

So, what is 5G, and why is it so revolutionary?

What is 5G: The Basics

5G is pretty simple when you get down to it.

It’s the fifth generation of cellular technology – a step up from 4G.

The main components of 5G include better speed, coverage, and responsiveness for wireless networks. Although the rate you get with 5G can differ, the average performance is 10 to 100 times greater than any standard cellular connection.

In other words, you’d be able to download an entire season of Orphan Black and watch it on your phone in seconds with 5G.

More importantly, 5G also delivers new technology for the broader landscape too. Thanks to an ability to transmit and manage data more quickly, 5G opens the door for things like the internet of things (IoT), which links phones and computers around the world.

5G also has the potential to usher in a new age of smart cities. In smart cities, emergency services, traffic signals, and energy grids are all connected to improve health, safety, and performance.

Is It All About the Speed?

So, is the answer to “why is 5G revolutionary” just “better speed”?

Most of the companies and groups supporting 5G tout lower latency as the biggest benefit.

Low latency is a term that comes up very frequently when talking about 5G. Latency refers to the response time that you get when you click a link to begin streaming video on your phone. This sends a request up to a network, where you get a response that allows you to access the content.

Lag time is common with today’s latency. It might take around 20 milliseconds to start playing a video, for instance. While that might not seem like much, with 5G, latency gets reduced to as little as a single millisecond. That’s about as long as it takes for your flash to work on a camera.

If you’re playing a video game, using virtual reality, or controlling tools from a distance, low latency is essential. The 5G revolution is so significant when it comes to the latency that it’s introducing new possibilities in the healthcare environment. Surgeons are already experimenting with robotic systems that they can control to perform procedures from a distance through 5G.

Additionally, low latency through 5G will also have an impact on the growth of things like autonomous (self-driving) cars. If vehicles can communicate in real-time, they can avoid accidents without your assistance.

What are the Main Benefits of 5G?

While the promises of lower latency mean huge things for the 5G world, there are other benefits to consider too. Each new generation of mobile technology has brought advantages with it. Usually, we’ve received more reliable cellular connections and better browsing tech.

In the 1980s, first-gen technology made cellphone communication a possibility for the first time. 2G introduced us to more efficient, secure phone calls and text messaging. With 3G, we entered the smartphone era, and 4G gave us the high-speed connections we needed to stream mobile video.

How Does 5G Technology Work?

Before you rush off to sell your phone and make some money for a new 5G device, let’s explore how this tech actually works.

Initially, the 5G network used the super-high-frequency spectrum. This offered carriers a higher capacity and a lower range for connectivity. It was a lot like using an advanced Wi-Fi hotspot.

Unfortunately, limitations regarding range led to interference issues, and carriers decided to branch out – using the lower frequency spectrums common in today’s networks. This means that 5G can now access greater distances and move through obstructions.

The Sprint company claims that it has the biggest 5G network today because it uses the 2.5 gigahertz spectrum. However, other businesses have claimed that they’ll be rolling out bigger networks in 2020.

There isn’t currently a network option for 5G in Canada that customers can use like 4G. However, there are companies actively working to deliver a commercial 5G launch.

Telus Mobile is one of the leading brands working on bringing 5G to Canada in 2020. However, Telus has already said that certain customers, particularly in the Vancouver area, will already have early access to the tech. This early access comes from the 5G Living Lab, which was introduced by the Huawei partner brand.

The 5G living lab aims to help the city of Vancouver, and eventually, the rest of Canada, deliver on a goal of becoming greener and more efficient through enhanced technology and smart city innovations. In addition, Rogers Communications is also planning a 5G release in Canada for 2020 too.

Can You Use 5G on Your Existing Smartphone?

Unfortunately, if you want to access 5G, you’re gonna need to consider some trade-in options.

5G tech requires a very specific set of antennas to allow phones to tap into certain bands of connectivity. For instance, the Samsung Galaxy S10 5G is specifically tuned to support Verizon’s network and the millimeter-wave spectrum.

Additionally, Qualcomm’s X50 modem will support many leading businesses that want to tap into specific 5G bands. Later devices will likely use a second-generation 5G chip to pick up a wider range of spectrum bands.

5G phones capable of riding on various networks are likely to emerge en masse in 2020.

Largely, younger people are more likely to anticipate the arrival of 5G technology coming sooner. In the report above 79% of millennials suggested that 5G will be mainstream within 2 years.

Are There Any Problems with 5G Networks?

However, there are some potential challenges to overcome too.

The high-frequency spectrum that many 5G strategies are based on struggles from a lower range – particularly when obstructions like trees and buildings are in the way. This means that carriers will need to deploy more small cellular radios and low-frequency systems. In other words, the speeds that we were originally promised with 5G may not be fully accessible.

Additionally, some groups are concerned that certain cellular signals might cause health issues. There haven’t been any conclusive studies that prove a health risk associated with cell signals. However, the rise of a new system like 5G is sure to lead to questions.

Many researchers say that even the super-high frequencies that 5G rely on aren’t harmful to human cells. However, critics argue that there’s not enough research available to know whether 5G is really as safe as it should be.

5G Will Shape Our Future

No matter what you think of 5G, it’s impossible to ignore the impact it will have on our future.

Canada’s government has already said that it is preparing for the arrival of ultra-fast internet services to make 5G more available from 2020. The Federal Innovation Ministry even released a paper outlining the changes to an auction expected next year. There’s also information available on a new high-frequency wave spectrum coming to Canada in 2021, and a new frequency in 2022.

The next steps in Canada’s growth plan will continue to enhance and update internet access. At the same time, this strategy will allow for a wider access to 5G, while enhancing the competition in the marketplace, and lowering prices for Canadians.

The government estimates that 5G will be a $40 billion industry in Canada by 2026. In other words, now could be the perfect time to start thinking about how you’re going to finance your new 5G phone.

Don’t worry, you can still trade in your old 4G models with gizmogrind.