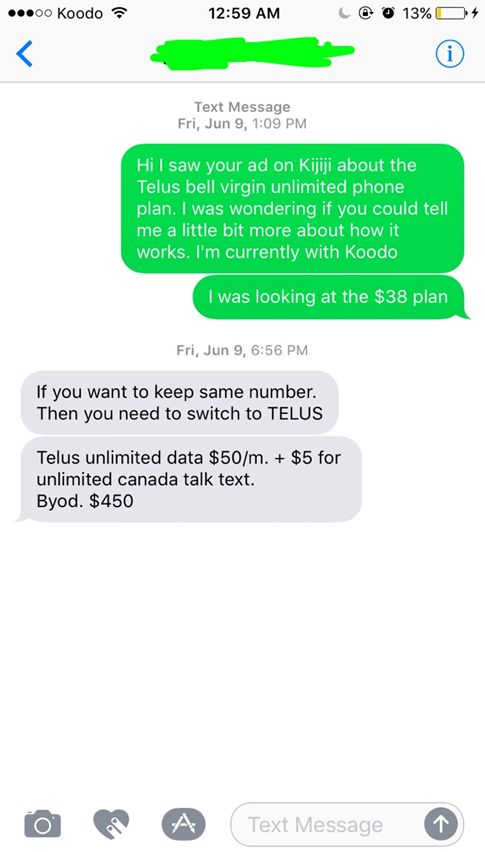 The cost of owning a phone here in Canada is ridiculously high and often unnecessarily overpriced. When you think about it, there aren’t that many telecommunications companies in Canada so the competition to get customers is much higher. When everything is run by 3 main corporations, it makes it harder to find alternatives to getting a phone plan that won’t cost you an arm and a leg. In this blog post, I’ve aimed to break some major phone companies and the way these phone plans are laid out. However, I’ve also explored other options that are beneficial and won’t leave you entirely broke.

In Canada, there are 3 main companies that offer phone plans for Canadians and include major corporations otherwise known as Rogers Wireless, Telus Mobility, and Bell Mobility. You might be wondering why I haven’t included companies like Fido or Chatr. The reason being is that Rogers, Telus, and Bell control the remaining phone companies in Canada. This means that Rogers controls Fido, Chatr, and Cityfone, while Telus controls Telus Mobility, Koodo and Public Mobile and Bell is controlled by BCE Inc which also controls Virgin.

So what exactly does this mean for you?

Well for starters, although you might think you have a lot of options to choose from you’re inevitably going to end up giving your money to one of these three companies. Let’s take a look at some plans from Rogers, Fido, Koodo and Freedom Mobile. I’ve broken them down into 4 different sections down below:

On the high end of the spectrum, we have Rogers which has plans that range from around $80-$100+. If you think about that in terms of a year you will be paying approximately, $960 per year for the most basic plan.

Here is their lowest plan when you bring in your own device and choose between 1-2 GB of data. If you choose local calling as oppose to Canada calling, your plan will fall down to $75 which is still quite a lot for a phone plan with very basic add ons.

On the contrary, here is their most expensive plan if you bring your own device:

This comes to a whopping $375 a month. That’s approximately $4500 a year!! That’s crazy expensive for a phone plan, especially when you consider the fact that many people have other expenses to take care of such as rent and groceries.

Next up we have Fido which isn’t all that different from Rogers. It’s still quite expensive to deal with.

Fido’s lowest plan starts at around $65 which is a whole $10 less than the most basic Rogers plan. Again, this is quite a lot considering what you’re paying for which includes 3 gb data a month and unlimited calling and texting. However, if you want to increase your data it will be another $20 to increase it from 3 GB to 5 GB. Considering all the other costs that people have to take into consideration, this roughly amounts to $800 a year. If you think about the other things that one has to pay for when dealing with daily expenses, then $800/year doesn’t seem like much. However, considering the extra add-ons like data and the fact that you do not necessarily need unlimited texting and calling, you have the option of saving more money.

Koodo is a much cheaper option in comparison to Fido and Rogers. This is the phone company that I’m currently with, however, I do have to admit that the costs do add up eventually. Let’s take a look:

The last company I want to take a look at is Freedom Mobile. This has the cheapest phone plans and although this is true, quality of service is debatable and depending on where you live in Toronto and the surrounding GTA, you might not always get service.

Again, Freedom begins with their $30 plans, however, the only difference is that for $10 more, you will be getting 2gb of data. Taking into account all the other plans that barely offer any data for such a little amount this is a pretty good deal. In a year you would have spent $480. Relatively reasonable but again, some people cannot even afford this.

I’ve focused on these 4 main companies although there are many that I could have covered. I want to highlight the difference between the highest and the lowest. Next up I will be discussing the ways in which you can figure out what is best for you and what the next steps are in addition to these phone plans.

When you think about purchasing a phone plan you have to keep in mind that most phone plans include the very basic things such as texting and calling. However if you want extra add-ons such as data, call forwarding and voice mail then you will have to pay extra.

For starters, think about what kind of phone you have and what you’ll be using it for. I use my iPhone for personal use and mostly stick to texting and using data to stay in touch with friends, updating Instagram pictures and take snapchats. I hardly call anyone. When you prioritize what you use your phone the most for, it makes it easier when you choose a plan. Therefore, if I were to go in for a new plan, I would take one that has limited text, limited calling and tons of data. Since I have an iPhone I can use iMessage on wifi or data. I also use WhatsApp and since that app has calling, I don’t necessarily need to focus on a plan that has calling either. This, of course, isn’t very feasible especially since you either need to be on wifi or have data to use apps. Therefore, I would probably get a limited plan with tons of data. In this case, I’d probably go for the $59 Freedom Mobile plan. This includes 8 GB data, 2400 minutes and unlimited global text.

The next option that I’ve looked into is buying a phone plan off of websites like Kijiji or Craigslist. You might be thinking, “how does that even work?” To be quite honest I was skeptical and unfamiliar with it myself until I did a bit of research and realized that you could get a decent phone plan off of Kijiji with a lot of extra things that most phone companies wouldn’t provide.

This is an ad that I found on Kijiji for someone advertising a Telus-Koodo phone plan for $48 a month. If you look closely you can see that the person advertising it has a fee of $100 for activating the plan. So essentially you will be paying $100 +$48/a month.

The way these plans work is the person activating/selling them on Kijiji has figured out a way to it to people here in Ontario. Many of these are out of province plans from places like Manitoba and Quebec. The reason they are cheaper in those provinces in comparison to Ontario is because they have more competition. Therefore, they lower their prices in order to compete with that particular market.

I contacted the person in charge of this particular phone plan and found out that if I wanted to keep my number then I would have to change my plan to Telus. Luckily for me, my phone is unlocked so that isn’t an issue. However, my plan would need to be changed to the $50 plan when I was originally looking at the $38 plan. On top of that, the activation fee was about $140 so I would be paying $450 to activate the phone plan. In the end, I wouldn’t be saving any money because I’d have to pay $50 on my phone plan every month. This is why it didn’t’ seem like it was worth it for me. I knew that if I researched into it a bit more I could definitely find a cheaper plan on Kijiji.