7 Terrifying Symptoms of Smartphone Addiction You May Already Have 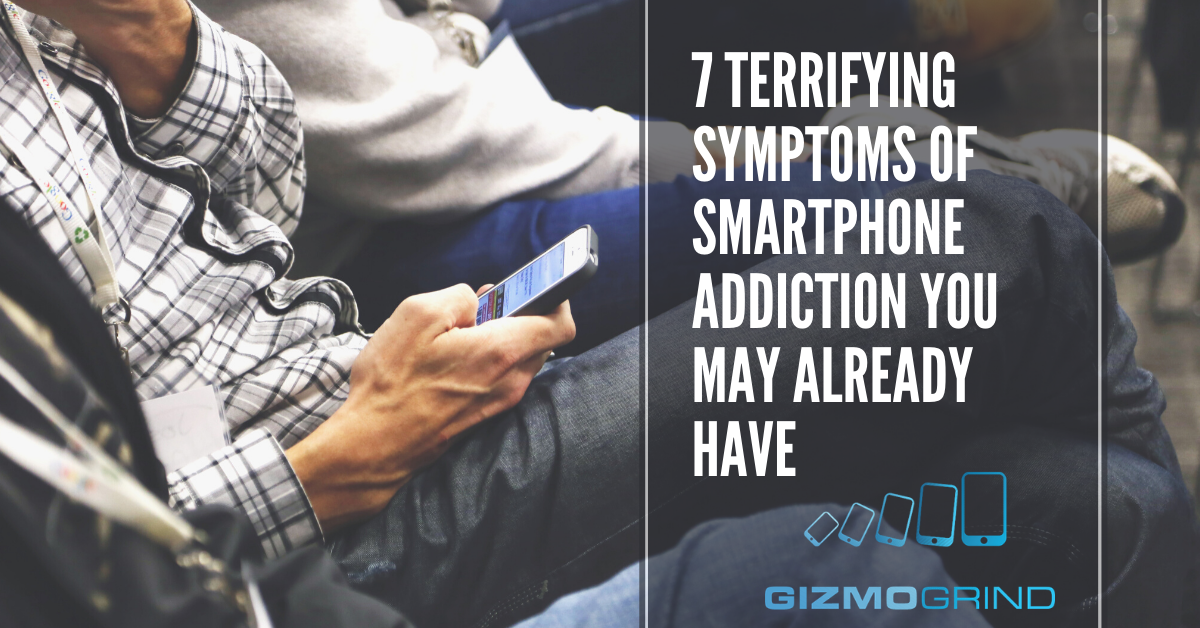 Cell phones are easily one of the most powerful and versatile tools in the world.

We depend on our phones for absolutely everything.

Whether it’s checking your emails on the tube to work or connecting with your family after you’re done at the office, your smartphone can be a very handy accessory.

Phones are so convenient that we’re quickly becoming addicted to them.

When you can’t find your smartphone, you’re likely the one to feel lost, overwhelmed, and scared. While there’s nothing wrong with enjoying all the benefits of your new iPhone, problems can arise when you’re so dependent on your phone that you can’t live without.

A study from the University of Derby found that one in eight people are now addicted to their phones.

So, how do you know if you’re a victim of the smartphone epidemic?

The Realities of Cell Phone Addiction

Before you panic and sell your phone to cure your addiction, let’s make sure that there’s a real problem that you need to overcome.

It’s important to recognize that smartphone addiction isn’t just a trending topic like 5G or blockchain. This is a real problem that’s gaining a lot of scientific attention. The CTA suggests that 86% of Canadians now own a smartphone, and the market is still growing.

Meanwhile, health and psychology experts are regularly creating new terminology to help understand the pathological use of phones, such as:

It’s clear that excessive cell phone use is a serious problem for many people. However, some medical experts are still reluctant to assign the word “addiction” to the issue. Despite this, the symptoms of smartphone addiction are often seen as very similar to other behavioral addictions, such as the need to gamble. For instance, you’ll feel:

The Diagnostic and Statistic Manual for Mental Disorders recognizes behavioural addiction as a serious problem in the current landscape. As a result, we see a lot more research into smartphone addiction and what it means.

The following symptoms could indicate that you’re already suffering from an over-reliance on your phone.

Smartphone addiction is regularly linked to problems with sleeping.

Research indicates that there are a number of reasons why smartphones could disrupt your sleep.

As well as convincing you to check your phone instead of snoozing, your device also emits blue light, which is disruptive to your sleep cycle, or circadian rhythm. The blue light of your smartphone is similar to the natural light of the sun. This means that it tells your brain to stop producing melatonin, which is crucial to sleep, and start producing cortisol (the stress hormone).

People who are addicted to their phones will consume more blue light in an evening than they should. Additionally, you may find that it’s hard to unplug from social and work events when you should be getting your Zzz’s.

Although an attachment to your device is part of it, smartphone addiction also comes with a variety of measurable and tangible symptoms that showcase your dependence on your device. For instance, some addicts find that just the thought of living without their phone causes them severe anxiety.

If you’re already a victim of the symptoms of smartphone addiction, something as small as waiting a couple of hours to get your iPhone repaired could leave you tense, stressed, and agitated.

Even leaving your phone downstairs when you go to bed could make you nervous.

This is known as a symptom of withdrawal, and it’s one of the most common ways to determine if you’re addicted to your device.

3.    Your Behaviour is Changing

Sometimes, the feelings of anxiety and stress that you encounter when dealing with the symptoms of smartphone addiction, can even change your personality. Although your device is a helpful piece of technology most of the time, when you become addicted to it, you can end up becoming a worse version of yourself.

For instance, if you’re addicted to your smartphone, you may find that it’s difficult to let other people touch your device. If you accidentally misplace your phone, you may become overly stressed and aggressive. There’s a chance that you take your anxiety out on others.

Smartphone addiction has also been linked to an increase in impulsive behavior, driven by an imbalance in brain chemistry. You may find that you’re unable to stop using your phone, even when you know you’re putting yourself and others in danger.

It’s this kind of addiction that leads to risky activities, like texting or calling other people when you drive. Remember, people who text and drive can even have worse reaction times than drink drivers.

Do you find that you’re constantly missing out on what’s going on around you?

Even when you’re sitting in the same room as your friends and family, you don’t know what they’re talking about, because you always have one eye on your phone. Maybe the problem even follows you into work, making it difficult for you to accomplish your professional goals?

An inability to concentrate on what’s happening around you can indicate a significant problem with smartphone addiction. If you notice that you spend more time checking social media, scrolling through photos, or checking your texts than connecting with people in real life, then there’s a good chance that you’re an addict.

Research conducted by the University of Zurich examined the brain behavior of addicts on smartphones with an EEG machine. Soon after, the scientists learned that people who constantly use their smartphones have a high level of activity in their brain when touching a screen.

The pleasure that people feel when they interact with their phones ensures that they keep coming back for more – even when the physical side effects begin to mount up. Excessive use of your smartphone can quickly lead to pain in your fingers and joints, as well as discomfort around your neck and back.

Tilting your head forward to look at your screen results in a poor posture, placing stress on your cervical spine, which leads to back pain in the long-term. Eventually, the physical symptoms of smartphone addiction can be crippling.

6.    Difficulty Relating to Others

If you spend all your time and effort on your smartphone, then it’s going to be difficult for you to connect with people, rather than technology.

Addiction to smartphones can cause relationships and friendships to break down. That’s because although you might be liking and commenting on your loved one’s photos online, you’re not interacting with them in person.

When you’re actually around the people that you care about, there’s a good chance that you’ll spend most of your attention on your phone rather than actually connecting with the human beings around you.

Smartphones were designed to help us stay connected to the worlds around us. However, the truth is that they more often cause us to disconnect from our reality and pay more attention to digital environments. You might have millions of followers and friends online, but the more time you spend on your phone, the more alone you’ll feel.

Last but not least, if you’re suffering from the symptoms of smartphone addiction, you might be aware of your problems. There’s even a chance that you’ve tried to cut down on your time using your phone before.

Unfortunately, studies show that although 47% of people have tried to limit their smartphone use in some way, only around 30% actually succeeded. While you might start with the best of intentions, you’re likely to be overcome by the desire to use your phone at all times.

Some people even suffer from phantom vibration syndrome, where they can constantly feel their phone notifying them in their pocket, even when it’s sitting on a table halfway across the room.

If you’re one of the many people dealing with the symptoms of smartphone addiction today, then the best thing you can do is look for ways to cut back.

However, it’s important to be clever about your plan for success. Selling your phone instantly and exchanging it for a less enticing model might not be the right strategy for everyone. Instead, you may need to whittle down your smartphone use, or restrict yourself to a certain number of minutes each day.

When you finally feel as though your smartphone is a valuable tool in your life, rather than something crucial that you can’t live without, you can consider a more drastic change.