The Future of Smartphones 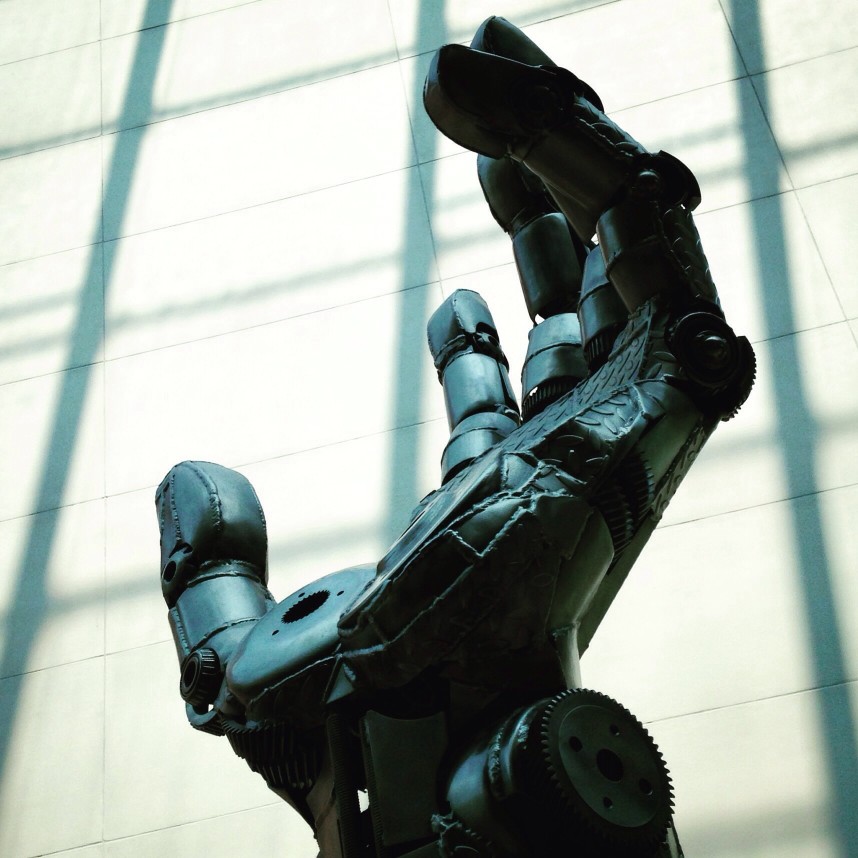 I remember being obsessed with the mobile phone ever since my father got his first Qualcomm brick with the pull out antenna. He had it holstered on his side. Damn, that was cool. Each pixel was the size of my thumb and the only thing you had was calling, texting wasn’t mainstream yet.

Then 2017 happened. Mic drop…! What’s everyday norm for today would be sorcery not long ago.

Yet new tech and scientific discoveries are being spewed up at ludicrous speeds. So what’s the future of smartphones? Absent an asteroid or Solar flare, you are the smart device of the future.

Read on for cerebral database update!

Massive improvements in AI will dramatically change the way we interact with smartphones.

For 4 years now we’ve seen the crude stages of AI that’s laid the groundwork for what’s to come. But today, behold, Google Assistant! A leap in AI and a taste of what’s to come.

Smartphone personal assistant apps will be better at predicting actions based on patterns.

The backbone of AI is software and heaps of data. The more data the AI has to work with the better it is. Cheaper memory and processor chips make it easier for AI software to gather more data points on you.

In 10 years, phone makers will leverage this data with AI software to give you a customized experience for every moment of your day.

You reach for your phone on a Saturday morning. Your screen will look completely different than the morning before. Font size, colours, activity suggestions and how you interact with the device will change minute by minute. What you see when you first unlock your device will always be unique to that minute on that Saturday morning based on what the AI determines is best.

And it will work because it will take its queue from tracking our everyday interactions with the software and our habits outside of the software to provide us with the most relevant information and layout for any given time.

This will obviously have other uses.

Artificial intelligence is already used by major advertising platforms. Word from the grapevine is Facebook gathers continuous data on over 2000 metrics for every user. That’s now! Plus, they’re not alone. We are in the middle of an AI arms race for who can build the smarter system that sells more stuff.

With AIs of the future, ads will be hyper-targeted by guzzling any piece of data to detect patterns and calculate the likelihood that you will make a purchase.

Here are some data points that AIs of the future will look for.

Keep in mind, the above example is short, expect a list in the thousands.

The AI of the future will exceed this by also gathering unique traits about you. It will be programmed to look for data points outside of the list that it was given.

What will an ad look like in the future? Let’s say you’re in a rush and forgot your morning cup of joe on your way to work. Your phone will recognize, from your heart rate that you haven’t had your fix yet. It calculates, time to work, lineups at different coffee shops on your way and alerts you with:

“Hey Kate, you can still grab a coffee and make it in time to work. Here’s a list of places on your way”

Enhanced marketing opportunities created by future devices means your “smartphone” if that’s what you want to call it, will be more of an asset to marketing giants like Google, Facebook, and Amazon. So what price tag will they stamp on these puppies?

How much will a future smartphone cost?

This may be one of my crazy theories but id bet smart devices of the future will be free. These are the two factors that will drive the smartphone price down to nada.

I’m sure you’ve heard the standard “They keep getting more expensive” line of a new phone owner. That’s quickly changing.

2016 and 2017 should have been called the years of the Flagship Killers. Today you have more options thanks to budget phone makers like Huawei, OnePlus, ZTE and Xiaomi.

These guys are making real high-end smartphones. Bank gauging prices not included. Flagship Killers will inevitably force the likes of Apple and Samsung to reduce prices.

For a while, nobody took them seriously. I know for me, I wanted to take the safe route and spend the extra $200 – $300 with an established brand when I was shopping around. Now I’m sold, big brand alternatives have proven to be as reliable and feature-packed as any.

This competition will drive prices low enough for the next step to $0 phones.

Advertisers Will Give out Free Phones

Data is the new King and it helps sell products more efficiently, but you need a place to market to customers and tons of data to make statistical patterns on the likelihood that someone will buy if an ad is shown.

You might find this hard to believe but think of it this way, you pay for Wi-Fi and TV but not for the router or DVR. Some landline phone service providers will give you a free wired phone with a subscription.

Smartphone makers of the future just might be handing devices out like Santa to make sure they have the largest user base. Whoever has the most users, can sell more ad space! Creepy, but it may be where we’re headed.

Smartphones replaced by the Cloud

They’ll become so small and ubiquitous that the actual processors can be installed everywhere.

So instead of buying hardware, you’ll buy software. Yep, this is what I spend my weekends pondering!

How, you ask? Imagine your furniture, food packaging, walls, kitchen appliances all with powerful processors that are connected to the cloud. Like a car has “apple connect” or “android connect”, everyday items of the future may be sold with connectivity to your software provider of choice.

So… Smartphones as we know em disappear. We may still have a device to hold in our hands, but it will merely be an extension of the actual computing we purchase over the cloud and you’d be able to go about without it. Take this example, you buy a T.V, not for the remote control, instead, you get a remote control with the purchase of a T.V for utility sake.

I justify this thought knowing both consumers and advertisers stand to benefit. These are two important factors that drive change in the smartphone world. Users get convenience and advertisers get more data points to work with.

Today we interact with the cloud through our IOS or Android and other physical devices, how does future me send a text, take a photo or read an article without a physical device?

A Voice in the Clouds

One thing is certain, interactions with our devices through voice is still in its infancy and has lots of room for improvements but we’re already using it.

I find myself saying “Ok Google” more frequently as my confidence in its capabilities grow.

Weird thing about human technology, it always gets better. My guess, 2 years and Voice interactions with technology will be fluid and intuitive enough that most people will use it more than physical touch for their smartphones.

Folks, touch is on its way out and that’s a fact. You will always have options, but most of us want to be Tony Stark talking to Jarvis. Every advancement in voice means a little more of the smartphone becomes redundant

Projection tech has lagged behind because of its obvious limitation in bright environments. But engineers are finding ways around this by using glass and other highly reflective surfaces. For example, many cars today have HUDs (heads-up displays) that work perfectly during sunny days by projecting images onto the windshield in front of you.

Interacting with projection displays was never a problem, that capability has been around for some years already. So your everyday household items can serve as a keyboard or a screen to watch a video on. You’ll be FaceTiming on the couch hand rest and be watching a recipe video from your kitchen counter in no time!

Amazon launched a store, without checkouts where you just pick up what you want and leave. A suite of tech tracks your movements and knows what you took with you. Here’s their promo vid.

I explained earlier that much of computing will be in the cloud, Amazon Go is ground zero. By now your filling in the blanks. Everything you can do on your physical phone, the future you, or grand you, will do effortlessly by interacting with the space around you.

Imaging a Tim Horton’s, Mall or any public space, with no Wi-Fi, not happening! That’s what Biometrics will be in the future. You’re securely signed in everywhere you go, with your face, hand, eye and whatever else they start scanning. Starting a video call from your car that just scanned your face to start the motor will be everyday mundane.

So your Samsung is disappearing! But there is one place where Your iPhone will come to life again.

Becoming One with The Matrix

It’s no secret, not much imagination needed here. Human beings will merge with technology. Chips are constantly increasing in power and decreasing in size, we always want them close to us and we can’t do without them. Some take them to the washroom, it’s the first thing we see when we wake up and the last thing we see before bed. You do the math.

Here we are, in the deep end putting a computer chip more powerful than 1000 gaming rigs into your brain. As far-fetched as it seems, experts like Dr. Ray Kurzweil predicted in an interview with CNN that by 2030 human beings will become more non-biological than biological.

Still sci-fi for now, but there’s plenty of chatter around neural implants since Elon Musk decided to back Neuralink. A company dedicated to the research and development of human neural implant tech.

It’s a real thing for many of the smartest humans alive today.

I get it, you’re averse to the idea, but that’s now. When this stuff is ready for human use we’ll be so tightly meshed with technology that it’ll be the natural next step.

I think cracking open skulls isn’t the way to do this, so here’s a dose of imagination. Imagine a pill filled with tiny robots called nanobots that can navigate to your brain and self-assemble themselves into a chip.

Questions for The Future You

Some things are unsettling. I found having a chip in my head less unnerving than the wholesale hoarding of data on our lives. I mean, at least a chip will enhance us, quite possibly for the better.

No one can predict timelines on when this will all happen but one thing is certain, the smartphone is changing what it means to be human. Emotion, intelligence, and consciousness itself are being rewritten.

I’ll leave you with some questions. Once we start down the road of enhancing biology with technology, what do we call our selves, humans? Robots? The real question is, will we continue to evolve our technology to the point of making humanity itself obsolete?